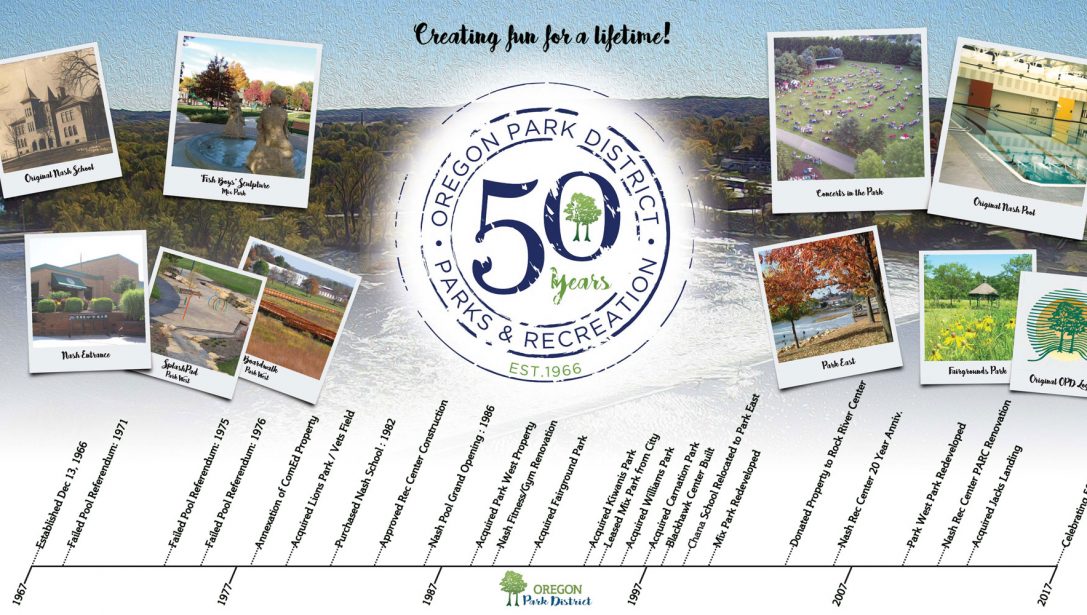 The Oregon Park District was established in 1967 “to efficiently, effectively and equitably provide the highest quality recreation programs, facilities and park resources in cooperation with all community resources to enhance the quality of life for the District residents and visitors”. 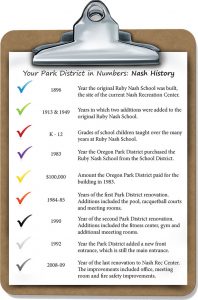 Ruby Nash School consisted of three additions built in 1896, 1913, and 1949.  The school housed everything from kindergarten through high school during its use as a school building.  The 1896 building was where the racquetball courts, multi purpose rooms 1 & 2, and the locker rooms are located.  The 1913 addition stood where the south end of the pool is presently located.  The entrance to that building is now the entrance to the snack bar.  At that point you could go up 1/2 flight of stairs to classrooms or down 1/2 flight of stairs to the locker/restroom areas.  The 1949 addition is still standing and houses the office, north/south hallway, multi purpose rooms 2 and 4, and the west gym.  There was an east entrance to the building to the gym and cafeteria area (presently multi purpose room 4, kitchen and east/west hallway) that came directly into the building with no entryway.  The curved brick wall, part of that entryway, is still in the gym storage room.

The Oregon Park District began leasing the present recreation office space from the Oregon School District in 1979.  At that time kindergarten, first and second grades, early childhood and head start classes were still housed in the building.  The Park District continued to lease this space for the next four years and were allowed use of some of the classrooms and the gymnasium on evenings and weekends.

In the fall of 1984 major construction began on the 1896 and 1913 buildings to build everything to the right side of the hallway as you enter the main part of The Nash Recreation Center.  The 1896 portion of the building was torn down and the racquetball courts, multi purpose room 1 & 2, and the locker rooms were constructed.  The two columns at the front counter area were at one time the principal’s office.  As you walk south down the long hallway, there used to be glass windows above the present heating units as well as a doorway to the playground which is where the pool is.  The school bell from the belfry was donated to the Ogle County Historical Society.  The pool was also constructed at this time.  Nash Recreation Center first opened its doors on December 30, 1985.

The 1949 addition to Ruby Nash School still remains in use as the main hallway, offices, multi purpose room 4, multi purpose room 3, (formerly a stage area with gym being to the east), and about 1/2 of the present gym (where the curtain hangs).  When Nash Recreation Center opened, several pieces of Keiser weight equipment and stationary bikes were in multi purpose room 4.  That was the extent of the fitness equipment and area.  What is now the hallway to the east end of the building was a kitchen.  The building was used like that from 1985 – 1989.  In 1989 it was determined that more gym space and a bigger fitness center area were needed.  At that time construction began again, doubling the size of the gym and adding multi purpose room 5, and the fitness center in the lower level.  The east gym wall area had to be terraced to allow for the variance in grade of the land and it was easier to construct a lower level than to level the area for same level construction.  Nash Recreation Center was never closed during this construction phase.  In 1990 the remainder of the building was finished as well as any updating and remodeling to the rest of the buildings.

The Building Maintenance Supervisor’s workshop, located between the locker rooms, was originally designed as a “check room.”  All users of Nash Recreation Center were to check in here before using the facility.  Equipment could also be rented here as well as valuables being kept for customers while they were using the facility.

The front counter information desk was originally located where the present Aquatic Coordinator’s office is.  This area was shared by aquatics and receptionists/cashiers and over time, became very crowded.  In 1992 the present front counter entrance was added and the old office was converted to the Aquatic’s Coordinator’s office, with half of the space being used as a Pool Manager’s workspace.  At that time, the staff lounge area was divided into a small staff lounge and the Administrative Assistant’s office was opened.  This added one office space allowing the Recreation Department Secretary to have an office and the entire hallway area in the office to be used as a work area for the Recreation Department, housing the copy machine, duplicating machine, and several computers as well as table space for larger projects.

In 2008, the Nash Recreation Center underwent another small transformation.  The registration desk at the entry to the Rec Center was moved from the Northwest corner of the lobby to the South East corner.  This allowed staff to enter and exit the front counter from the administrative offices along the hallway.  In addition to moving of the registration desk, the entire lobby and office spaces received a face lift.  A new paint scheme was introduced to the Nash Rec Center along with new office furniture.  New way-finding signage and removable carpet squares were introduced to the common areas of the building. 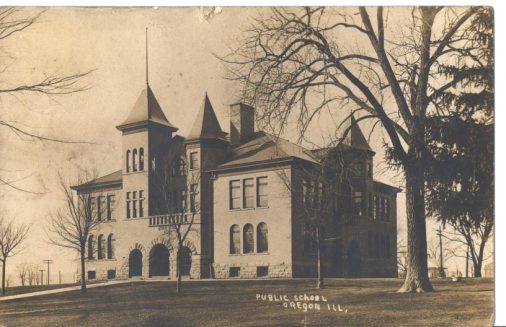